Alexa Fallacy - As if Anyone Thought Otherwise

Okay, no more theories, no more guesswork, I finally have proof that Alexa data does not jive with actual real internet traffic patterns. Well, at minimum it doesn’t match what they claim it matches - it does prove other interesting facts, but I’ll get to that in a minute. My Alexa rating is pretty high. Ha.ckers.org does tend to get quite a bit of traffic (somewhere around 11k-14k unique users a day visit the site). Most of my traffic is comprised of the security industry, but I do have quite a few SEO readers - especially the blackhat SEO crowd. That comes from a long standing bridge between web application security and SEO and it also happens to be that I’m one of the few security people who talks about both. For whatever reason I have a lot of webmasters who aren’t particularly interested in security who read my blog as a result of that bridge.

One thing that most SEO people (and indeed webmasters in general) have in common is that they happen to all have Alexa (or here for Firefox users) installed on their browser. It could easily be seen a spyware because it does report on where you are visiting but it also gives you the relative page rank of the page for your troubles. This can easily help you assess if a site is new, or if it’s old, if it’s got a real following of people, or not, etc… It can also tell you if the domain gets traffic to other cnames (if that’s interesting).

But there’s been a long standing theory that Alexa data does not actually indicate true ranking. Finally I was able to prove it (at least to myself - maybe other people proved it to themselves before now, but I haven’t seen any hard and fast stats until today). So here’s what the current graph of my Alexa ranking is over the last several months: 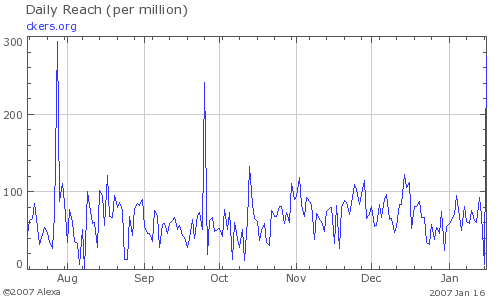 You’ll notice the two biggest spikes on July 30th and January 16th (just a few days ago). So you would naturally assume those are huge spikes in traffic, right? Well let’s look at the significant events of those two days in particular. On July 30th 2006, the site was Slashdotted. To most people that’s probably a pretty significant event and you’d expect to see a huge jump in traffic. Let’s look at what it really did: 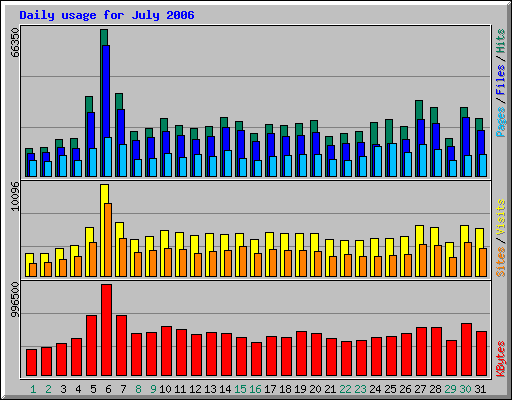 You can plainly see very little traffic change for the 30th. Sure it was up a great deal for the average weekend, but it was really not much of a spike, and nothing like the traffic levels you’d expect for the 4,000th biggest website on the planet, right? Could it be that SEOs also tend to read Slashdot? Okay, that’s really just a theory, so let’s put it aside for now. Now let’s look at the events of just a few days ago (the 16th). 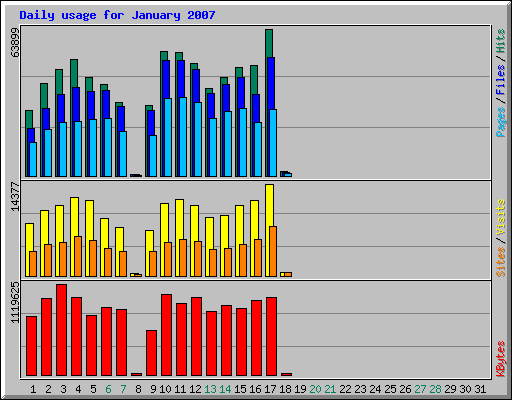 You can see that I did get a fair amount of traffic but it was nowhere near my highest day this month and I certainly didn’t jump up by more than a few percent of my normal traffic load (the 17th proved to be a much higher traffic day and the 8th was the day the firewall died on us). Where did all the Alexa traffic come from that made next to no increase in the number of users we get in a day? Well as you will remember, just a few days ago a self proclaimed Whithat SEO said he intended to hack a bunch of sites. Ha.ckers.org was named in that list of sites (despite the fact that I really do not consider ha.ckers.org to be an SEO website). Ha.ckers.org was linked to by his website, and many other SEO’s picked up the list as well. In essence, every SEO that would possibly click on a link to a site named “ha.ckers.org” did click - and all in one day. Thus you can see only a minor increase in traffic on the 16th but a huge spike in Alexa ranking.

It is interesting to note how many SEOs use the Alexa toolbar. I bet that database would give away a lot of SEO secrets if it were ever compromised. Spyware never sounded so good.