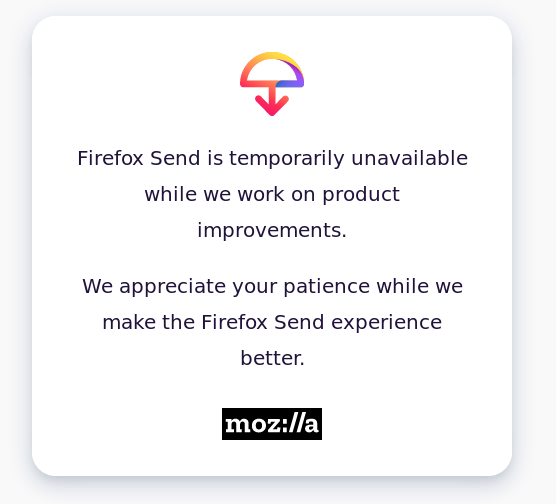 About a month ago I had to send several large files from a Linux PC to a Windows PC. Considering that options like ShareDrop are not as fast as they should or I would like, I decided to do it with Firefox Send, and it works very well, at least if our internet connection is fast. The problem is that it seems that not only I think it works pretty well, but also people with worse intentions have been thinking about it.

For those of you who don’t know, Firefox Send is something like WeTransfer: a service with which we can send files over the Internet up to 2.5GB if we are registered or 1GB without a Firefox account. If we access the web, we’ve been seeing something like this for days: a message telling us that it’s temporarily unavailable while they work on improving the product.

Firefox Send has been used to send malware

The reason seems to be that they have been using it to distribute malware. This is explained by ZDNet, who asked Mozilla several questions about it and whether they were going to implement a mechanism for reporting abuse. Shortly after this, the service stopped working; the web cannot be accessed in any way, which means that the download links are not available either.

We will temporarily suspend Firefox Send while we make improvements to the product. Before we re-launch it, we will add an abuse reporting mechanism to augment the existing feedback form and require all users who wish to share content using Firefox Send to register for a Firefox account.

Until they re-open the service, we can’t be sure what changes they will make. They do mention that they will require anyone who wants to use it to have a Firefox account. In addition, they are expected to add the reporting mechanism and probably some anti-virus so that no malware can be distributed from Firefox Send. Until then, we will have to go back to using other alternatives.

Get the latest post right in your inbox.
Linus Torvalds approved the replacement of some terms in Linux code with neutral names
Aurora OS developers included a memcpy fix in Glibc